I predicted this almost a year ago to-date, noting that even if they “repay” their loans, those of us who really financed it won’t get our money back. Uncle Sam will, but we won’t see a penny of it; no dividend checks, no profit sharing, nothing.

Well, it’s official. According to the Detroit News, the Obama administration concedes that the auto bailout money will not be repaid. The silver lining, according to the White House, is that “the projected loss came down to $30 billion from $44 billion” an improvement attributed to better-than-forecast auto sales.

My take is that most of the “improvement” in auto sales for FY2009 were simply time shifted from 2010 or 2011 due to the cash for clunkers debacle, which means that it’s not a real improvement, and in years to come we’ll end up paying for these short-term gains.

Before I tell the latest Chrysler Fail, I want to explain how to do customer service the right way.  Chrysler could learn a thing or three from WOW!

I spoke to my Cable Monopoly Provider yesterday, the customer service representative couldn’t have been nicer. We had been experiencing intermittent service glitches, where the HD signal would “freeze” or slow down considerably, to the point that we could not watch whatever program we were trying to watch. She lowered our monthly cable and internet bill by approximately $11/month, and sent three vouchers for free pay-per-view movies.

And they lived happily ever after.

Chrysler Financial called me this afternoon, and the following message was repeated probably 25 times before the call abruptly ended:

All representatives are still busy you may contineu to hold or you may hang up at any time and we will attempt to call you back later. thank you.

There was no pause between the loop. No music. No messages urging me to go to the website (which I can’t do anyways!). Just the repetition of that message. I called back:

In response to the launch of our redesigned website, we are experience longer-than-usual wait times.

The lady with whom I would eventually speak was irritable (this is the best I can say about her). They wanted to know why I hadn’t made my payment a few days ago, and when I would be making it.

I told her in no uncertain terms that I was willing and able to make a payment (like I had made the previous 25 payments), but that my previous attempts to do so had been thwarted by their technology “upgrade” (news flash: if it’s a monumental inconvenience, it’s a downgrade). I explained the facepalm experience, explained that I was through wasting my time, and if they decided that they wanted the payment, I’d just wait for them to call me, flippantly adding “And here we are.”

I even told her that I’d be happy to make a payment immediately, over the phone, if they were willing to waive the $12.95 “phone processing fee”.

I continued, suggesting that forcing people with 45 days until lease/contract termination to jump through hoops as the Company migrates to a new web-server, rather than A) grandfathering them or B) allowing them to “upgrade” based on their old credentials is stupid as a football bat, and a waste of my time, and I got tired of wasting my time for the privilege of sending them $326 dollars.

So I waited for them to ask for it because that’s how I roll.

She took offense to this, repeating (as though I were a common deadbeat) things like “That’s not how it works…” or “You made the decision not to pay…” and “Nobody forced you to not pay…”

Indeed. But some ass-hat who decided that my username needed to be changed from 7 characters to 8 characters ultimately set in motion a chain of events that resulted in Chrysler wasting money, and wasting my time.

I have now “registered” for the new Chrysler Financial website, but I haven’t received my confirmation e-mail yet…

Chrysler decided to revamp their online bill payment system. The web site still looks like the same crappy website, but they’re forcing all their customers to complete a new registration process. This is how they decided to inform users of the process: User attempts to log in, and fails. Your old password no longer works, and you’re directed to a “Registration” screen if you read the message that says:

Please proceed to the Registration Page if you are a first-time or existing user who has not yet completed the new registration process.

Also missing from their new database, is my SSN, (as evidenced by the error message received when I follow the “forgot password” link) which might otherwise be used to validate my request to “register” under their new system. 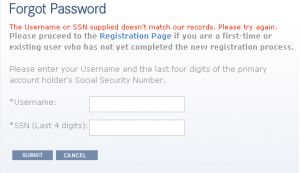 In order to register for their new system, Chrysler is requesting my account number and the VIN for the vehicle I’m currently leasing. Since I pay all of my bills online, I don’t have that information handy. (In)conveniently, I receive e-Bills (which should contain both the account number and the VIN), but the e-Bills are locked behind the 128-bit encryption of a system to which I apparently no longer have access.

Other companies with whom I do business have, in the past, felt it was necessary to upgrade something in their system, which required users to update information or re-register. Typically, they will allow you to access your account using your existing credentials, at which point you are prompted to update whatever it is that needs updating, prior to proceeding. This happened quite recently with my mortgage servicer and the transition was seamless.

Chrysler, on the other hand, is a disaster.  You literally have to re-register because you no longer exist in their system.