Recently, I bought some new snowboards. The first one (a Burton X8) I bought from an online store that specializes in that sort of thing, but when I rode it a few times and found that it wasn’t quite what I was looking for (mostly because I needed a different size) I turned around and sold it, breaking even on the transactions.  I did not list it on eBay and I did not sell it on craigslist or face to face. I listed it for sale on a snowboarding-oriented forum and had a buyer within a day or so.

He sent me the money via PayPal and I packaged up the board and shipped it out to New York.

Once I had his money, I shopped for a new board, and found a guy selling some Ride snowboards (I got the 2010 Ride Machete) at serious discount like 35% off. Again, not a store, not e-bay, not craigslist or face-to-face. I sent him a few hundred bucks via paypal and 3 days later a brand new snowboard arrived at my office. I vouched for him on the forum and he lined up a few more sales.

Another contact of mine (let’s call him “S”) lives in Montreal area, for some reasons (monopoly reasons, probably) many US retailers are not allowed to ship certain brands outside of the U.S.; this includes all of the big name brands in snowboarding like Burton, Ride, K2, Gnu/Lib Technologies, etc.  But right now, discounts are in full-swing at many US retailers.  So “S” wanted to buy a few new snowboards and some bindings. I offered to proxy, so he’s having them sent to me and I’m going to turn around and ship them UPS or FedEx to Canada.

So he bought one board from the same guy I bought my Ride from, and another from an online store.

If you’re wondering – even if he gets tagged with duty/taxes/etc., he’s still going to come out a winner versus buying the same boards from a Canadian retailer.

Here is a guy who I’ve never met in meatspace, and have only known a short time in the online, who’s shipping probably $700 USD worth of gear to me, on faith that I’m not a total douche who is just going to rip him off for two snowboards. Really, what could he do about it? Probably nothing really.

Fortunately for “S”, I’m not a total douche (partial, maybe) and I’m going to ship them right out tomorrow.

OK, no, this doesn’t totally restore my faith in humanity, but it definitely gives me a glimmer of hope: A few people who don’t know each other and have never met and really have no “legal” recourse against one another, have transacted probably over $1,200 worth of business, completely on our own. I’ve always felt like, when given the opportunity, most people are genuinely decent.

I think the problem is that governments have made those “opportunities” fewer, and further between.

The Korova milkbar sold milk-plus, milk plus vellocet or synthemesc or drencrom, which is what we were drinking. This would sharpen you up and make you ready for a bit of the old ultra-violence. 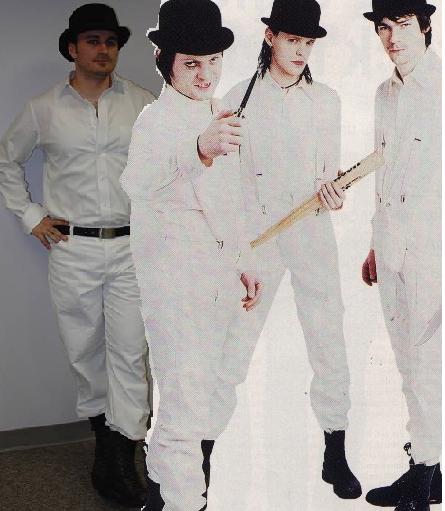 Unfortunately, white suspenders eluded me.  Maybe next year… Oh, and drencrom. Where can I get a glass of that?

Last night I was at the Fillmore Detroit to see Dethklok and Mastodon. One of my friend scored the tickets from work, and we were treated to a VIP booth and free drinks courtesy of Adult Swim. Nice. Dethklok stole the show, for sure. I’m only a sometimes-fan of metal, and one of the guys I went with is definitely not a fan of metal, but at the end of the night, we all agreed it was a good show.

Anyways, I saw the posters for upcoming concerts, and there were a few I wanted to check out. I haven’t been to a concert in quite a while, and I usually go in spurts—three or four in a relatively short amount of time, and then nothing for a long time. So today I went to LiveNation to look up tickets for AFI.

I have four questions: