Get in line, motherfucker. 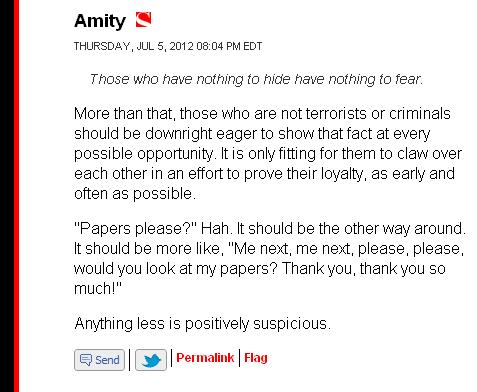 Fearful that a 96-year old with an obvious heart condition was a flight risk and drug runner and America-hating-terrorist, Border Patrol forced him to wait outside the vehicle in 100-degree heat while they checked his papers and did some other bureaucratic bumbling.

This particular 96-year old happened to be Raul Castro, former Governor of Arizona and ambassador to Bolivia, Argentina and El Salvador and that is the only reason you’re hearing about this.

It can happen to anyone. Don’t think that it doesn’t.

i don’t blame the govt for blacks lack of achievement. there’s something called “personal responsibility” that liberals find hard to comprehend.

see, you were taught at college that brown people are the same as us, and that really it is always someone else’s fault that they are violent, have a lot of fatherless kids, commit lots of crime, etc. as if european standards of civility and ethics have nothing to do with the overall higher achievement of people of euro descent.

in fact, the more “equitable” things became for blacks in this country the worse they got.

at what point do you actually hold people responsible for their own bullshit? you can throw all the money and pity you want at these people, but if you do not hold them responsible for being stupid and uncivilized–then how will they ever grow?

You can try and hide behind all sorts of made up statistics and anecdotal “evidence” about white-euro superiority, but you’re as racist as the day is long.

For the record, I don’t want to throw money or pity at anyone. I want to stop throwing money at (or more specifically, stop having my money taken from me in order to support ) organizations and institutions responsible for perpetuating injustices. Those  “European standards of civility and ethics” to which you attribute white/Euro superiority, you got it, that’s the same “standards of civility” that systematically dispossessed all of the North American aboriginal people under the doctrine of Manifest Destiny, that institutionalized chattel slavery on a scale never before seen, which further perpetuated the subjugation of freed slaves under color of law for a century after the civil war had ended, etc.

I’m not blaming anyone alive today for those injustices. But it’s absurd to pretend that they didn’t happen, or that they have had no influence on whatever cultural differences exist between various ethnic groups today.

In case it gets lost in the interwebs, I participated in a discussion on FB last week. A certain Jim Deakin, a “conservative candidate” for Senate in the State of Arizona, posted a comment:

Somehow, Deakin made his way on to my ‘friends’ list. So, I inquired, what’s the point of this comment? The ensuing conversation between several others (including Deakin) and myself, I think is revealing of the “conservative” stance on immigration. It reveals hypocrisy and ignorance.

I made it a point to cite recent data from FactCheck.org, which suggests that immigrants (legal or not) have a net neutral or net positive impact on the economy, so they’re not the “parasites” and scofflaws that the conservatives would make them. A Joshua Hoyt was quick to point out that “FactCheck.org is a seriously biased group… that caters to ONLY the democratic/liberal point of view.” He asked for additional sources, and I obliged with one from CATO and one from Fox Business, which indicates that:

According to the [Texas] Comptrollers’ office, state and local governments spent $1.16 billion to provide services like education, health care and safety, but raised an estimated $1.58 billion in tax revenues. Based on the data, the Texas taxpayer made a $424.7 million profit on its illegal immigrant population in 2006

And further to assuage their concerns about the “criminal” aspect, I reiterated the point that they are only “illegal” because of the accident of birth — having been born on the wrong side of some figurative line in the literal sand. Needless to say, neither Hoyt or Deakin responded to either of those comments. In fact, one would be hard-pressed to assume that Deakin even read the comments, because he responded with some talking points from FAIR.

As turnabout is fair play, I noted that FAIR is a “biased” organization with an explicit agenda to end or drastically reduce all immigration to the U.S. If you haven’t heard about FAIR, here is some information about FAIR that you probably don’t know, but should:

FAIR is one of a dozen organizations founded by John Tanton. They vary in the extremes of their policy, but all are essentially either anti-immigrant think tanks, or anti-immigrant activist groups. All their funding comes largely from less than a dozen sources (mostly individuals). Groups like US English, American Immigration Control Foundation (AICF), Center for Immigration Reform, US Inc, NumbersUSA, the 21st Century Fund, Population-Environment Balance, and the Immigration Reform Law Institute, and even the American Patrol (Voice of Citizens Together)…

Some of FAIR’s money comes from the likes of Richard Mellon Scaife; founder of the Heritage Foundation. FAIR also has ties to the Council of Conservative Citizens (CCC) and American Renaissance. American Renaissance is the white supremacist academic conference held in Virginia until it was recently shutdown by anti-fascists… Mark Weber, a principal of the Holocaust-denying Institute for Historical Review; White power web maven, former Klansman and ex-con Don Black; Gordon Lee Baum, “chief executive officer” of the CCC; and several members of the neo-Nazi National Alliance.

Again, from the “conservatives”, nothing but silence. Hoyt took the time to quote a certain Thomas Jefferson (wildly out-of-context, I might add) which he presumably found on some conservative forum.

Yet, from such, we are to expect the greatest number of emigrants. They will bring with them the principles of the governments they leave, imbibed in their early youth; or, if able to throw them off, it will be in exchange for an unbounded licentiousness, passing, as is usual, from one extreme to another. It would be a miracle were they to stop precisely at the point of temperate liberty. These principles, with their language, they will transmit to their children. In proportion to their numbers, they will share with us the legislation. They will infuse into it their spirit, warp and bias its direction, and render it a heterogeneous, incoherent, distracted mass. I may appeal to experience, during the present contest, for a verification of these conjectures.

I did not mention that this is the same loser argument used against the Chinese, and the Germans, and the Irish, and the blacks etc., etc., ad nauseum, always proven false, but I say “out of context” because he omitted TJ’s conclusion:

If they come of themselves, they are entitled to all the rights of citizenship: but I doubt the expediency of inviting them by extraordinary encouragements…

Deakin finally responded, stating in no uncertain terms that it is his “intention to get rid of ‘extraordinary circumstances’ such as jobs, welfare, healthcare…” Yes, you read that right. Deakin wants to eliminate jobs.

The “conservatives” are afraid of money being “sent back to Mexico” but by the same logic, money sent by Arizonans to Detroit for automobiles is bad for Arizona. They’re butt-hurt because immigrants “don’t pay taxes” while at the same time the conservative tea-partiers scoff at many taxes.

In either case, eliminating the opportunity for black-market employment by removing the prohibitive burdens required of “legal” immigrants, would go a long way to solve both problems (which I think are really canards, anyways). Stop making it so hard for these hard-working people to bring their families with them, and the money stays “here” for whatever that’s worth. And by legitimizing their presence, all of a sudden these workers become taxpayers, so the whole “net loss” economic argument is a moot point, too.

Let me make this as clear as I possibly can: people who want to come “here” and work and be productive and contribute economically, who refrain from crimes against person or property, should be allowed to do so.