There is something majestic about the Detroit skyline at night, especially the view from across the straight, in Windsor. But looks can be deceiving. 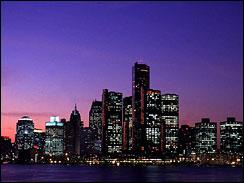 Last year, I noted that Detroit and Flint (Michigan) ranked numbers 2 and 4, respectively, on the list of America’s most dangerous cities. Well, we’re moving up — which in this case, is the wrong direction. Detroit is now ranked as the most dangerous city. In lockstep, Flint has nudged its way to #3 on the list.