In Detroit, when you call the police because you actually need their assistance the average response time is something like 40 minutes; this is clearly a Department which needs to direct every available resource towards providing actual help and assistance to those in immediate need.

Instead, Detroit is moving forward with a stop-and-frisk policy, designed by the same consultants who implemented the controversial (and recently-ruled unconstitutional* program in New York City). 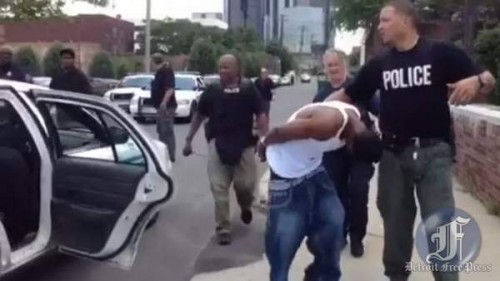 Defenders of these “stop-and-frisk” programs, like Detroit Police Assistant Chief Eric Ewing, are quick to argue about “reasonable suspicion”,

If we have reasonable suspicion someone is about to commit a crime, we’re allowed to stop that individual. If we have a good reason to believe they may be armed — say, if we see a holster, or a bulge that looks like a gun — then we’re allowed to search them. That’s just being proactive.

We’re not telling our officers they have to go out and stop X-number of people each day. But we are telling them to do police work.

But the basis of this “reasonable suspicion” is deference to the officer’s judgment, which statistical evidence — this is data coming from the NYPD — demonstrates to be laughably unreliable: About 90% of those stopped were completely innocent of any wrongdoing, i.e., the officer’s judgment was wrong, 90% of the time.

Let that sink in: Ninety percent of the time, they’re wrong. Yet we’re supposed to defer to their judgment?

The real issue is that stop-and-frisk, especially in light of the data, is essentially a fishing expedition. It’s NOT good policing, it’s an absolute and undeniable abrogation of people’s right to be secure in their person, and not to be harassed by the police at every corner..

While Ewing and other apologists may argue that their officers are stopping people “with a reason”, the statistics demonstrate otherwise. I suspect the reality is a combination of these three factors (hopefully more of 1 & 2 than of 3), among others:

To put this in some additional perspective: Detroit is literally bankrupt. It can’t afford streetlights, snow removal, garbage pick-up, etc. Further, there is a half-century (or more) of well-deserved mistrust and hostility towards law enforcement. Police response time is win-the-internet level of epic failure. Yet somehow, they think that randomly stopping people who are doing nothing wrong (and a 90% failure rate is akin to random stops) is a good use of what few resources they have?

No. It’s a waste of time, and it’s likely to be counterproductive. Every minute they spend harassing 90% of innocent people is a minute which could’ve been used doing actual police work, solving real crimes, doing community outreach, being available for real emergency calls and citizens in distress, etc., is a minute invested in fomenting even more distrust and hostility towards law enforcement.

* The News spends a lot of time on the racial issue, and while this may be a concern for some, I think it’s a red herring, and “journalists” should be ashamed for playing this card in lieu of addressing the real, tangible problems. I take issue with Scheindlin’s ruling on similar grounds: it simply is not the right reason to oppose these tactics.