Anonymous left a comment on Medical Marijuana in Michigan:

This article hurts the proposal more than helps it…while medicinal marijuana may prove beneficial, there are significant reasons why marijuana should not be legalized to the general public.

The crux of my post was, “Who cares if medicinal marijuana is on the ballot?” Medical marijuana may be a step in the right direction, but the real issue is “Why can’t (allegedly) free people be allowed to use it?”

I wonder why he didn’t list the “significant reasons”… Like the junk science that suggests marijuana is more harmful than tobacco? Nice try.

There may be a number of reasons why you’d prefer to abstain from the substance, but there is not a single, reasonable argument you can put forth to justify the violent interference with an adult’s peaceful and private decision.

Keep this in mind at all times: We’re not talking about you, trying to rationally convince people that they’re wrong. We’re talking about violence, perpetrated by agents of the State, against people who happen to have a habit that you simply don’t like.

That is, using all of the power and guns of the government, to force your opinions and beliefs upon those with whom you disagree.

Sorry, it’s never reasonable for a mature, rational adult to use violence in such a manner. Ever.

I went there and watched the video, the primary argument was that if a party receives x% of the popular vote, then they are eligible for federal funding in the next election, and that in order to increase diversity among candidates, people should vote for third party candidates if they don’t like the two major parties. Well, that’s great, if what you want to do is increase the size and power of the State, so even though everyone wants change, when push comes to shove, their actions indicate they really will be satisfied with more of the same old crap.

But, the two major parties control the system. They write laws and regulations that effectively prohibit third parties from being considered in the media, they exclude third party candidates from their Good-old-boy-club debates. They exempt themselves from filing deadlines (i.e., Bob Barr, libertarian, missed the deadline in Texas and is not on the ballot. Both major parties missed the deadline to be on the ballot in some states, but they will appear on all ballots.)

The fundamental objection which I take with regards to voting, is that within the confines of a non-voluntary institution (like government) which is imposed from without, it simply is not an acceptable means by which rational adults should resolve disagreements, or choose the courses for future action.

I might vote for Kent McManigal, just for shits and grins. But I’ll probably write in “nobody” for President. 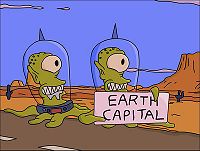