Someone at mises.org wanted to talk about can government create jobs? They pointed me to an article on Realclearpolitics.com called Government Must Create Jobs. The author, Marie Cocco argues that

Jobs … are the only way out of this crisis.

Cocco rags on tax cuts, because although the benefactors of tax cuts might buy “cheap imports” or even pay down debt, or save money, none of these things have any “immediate benefit when it comes to creating jobs.” She lambastes both presidential candidates’ proposals, McCain’s neo-Keynesianism is “worse than inefficient” because it pads businesses’ bottom-lines. Obama’s plan to give a $3,000 tax credit to any company which increases its head-count, lacks sufficient controls to ensure that the jobs “created” aren’t useless McJobs (I paraphrase her disdain for service sector, entry-level jobs) or to prevent lateral moves from eligibility.

But where are jobs going to come from? People need to spend money in order to create demand for products, which causes businesses to add headcount. The French economist J.B. Say once said something to the effect of “productivity buys productivity.” That is, one can’t consume without first having produced something of value..

Cocco’s proposals are an order of magnitude dumber than her criticisms. The best solution, in her opinion, would be a straight-up cash injection to every state in the Union.

Marie, in case you aren’t aware, the National Debt now stands in excess of $10 Trillion. In Times Square, the national debt clock ran out of digits. I don’t know where you think the money for your cash infusions is going to come from, but I know it would have to come straight off the printing press. Viva la Inflación. 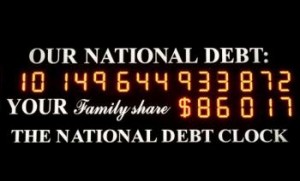 The next best solution, according to Cocco, is public works projects. “Direct spending,” says Cocco, “[produces] high wage jobs, the infrastructure improvements pay off later in greater efficiency and productivity for the whole work force.”

Government “created” jobs can come only at the expense of other goods and services that the people would, in their own estimation, prefer. Someone really (and I mean really) needs to be introduced to Bastiat’s Bastiat’s Broken Window Fallacy. We can certainly rob Peter, in order to pay Paul to dig holes in the ground. But that prevents Peter from buying goods produced by John, or saving for his uncertain future. If “greater efficiency” in the future is what people truly wanted, then they would provide for it. What they want, especially right now, is immediate security.

Freedom from oppressive taxation would be a good start. We need to be free to produce, without having all of our productivity wasted by taxes.