Do not be distracted by headlines touting Gold’s “record high” (closed today at $1054.80).  George Washington (of Washington’s Blog) prudently notes that gold’s nominal high is not quite one-half of it’s inflation adjusted all-time high, and cautions a reversal if the USD strengthens.

So, will the dollar strengthen?  I find this implausible, to say the least (likewise, GW suggests “the dollar will get creamed in the long-run”). I hate to be the bearer of bad news, but this means things might get worse.  Way worse.

Far more important that the elementary observation of a “high” price, is determining why the price is high.  Some analysts now are saying that the nominal increase in the price of gold is due only to a “weak dollar”. Weak currency = lower purchasing power = higher nominal prices. D’uh!

Presently, the dollar is weak because of crazy amounts of inflation and debt being piled up in attempt to sustain the musical-chairs of perpetually rising prices (often misinterpreted as indicators of economic well-being) which phenomenon was itself brought into existence principally by monetary expansion at the hands of the Federal Reserve. Recently, the Fed announced plans to absorb another $1.25 Trillion in (probably toxic) mortgage-backed securities. 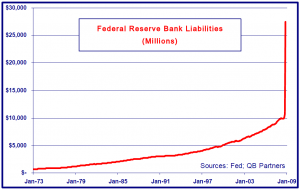 When gold was at its all-time high, the eventual “strengthening” of the USD was brought about by prime rates in the neighborhood of 15%. They got away with it in the early 1980s, but I do not believe that policy makers have the stones to pull out those sort of stops today.

The economy is not recovering.  Unemployment is 10%+ right now. Baby boomers are staring at an extra decade of nine-to-five since their retirement plans got the FUBAR treatment last year. Businesses aren’t hiring, they aren’t developing and they’re not investing; they’re hunkering down and trying to lean it out. Meanwhile, people are being tossed out of their homes because they can’t make the ARM payment.

Now imagine three times worse than that: Soup lines. Hoover blankets. Mortgages at 15% and 20% car notes. One-in-four Americans out of work. Would the people tolerate this? I hope they would not—you couldn’t lead lambs to this sort of slaughter.

So, you can’t but the brakes on it. But you can’t keep it going, either, without ultimately finding yourself neck-deep in hyperinflation, Zimbabwe style. The alternative is to try and avoid a total financial SHTF and economic collapse, by engineering instead a sustained period of economic stagnation, a long and painful restructuring.