This spring, prompted in part by a desire to waste less of my productivity, and in part by the novelty of the idea, and in part by the cred I stand to gain among greenies, I decided I wanted to start my own vegetable garden.  However, my backyard is on the North half of the property, so the shadows cast by the house and the garage, combined with those case by three large, 50+ year old trees (I think Maples) growing one on each lot line, and one big old White Burch growing in the South-Central region,keep my yard in near constant shade.

This is very nice for hanging out and barbecuing, but effectively useless for growing a vegetables garden, although I do have a patch of chives, and some basil, and oregano growing back there.  It seemed all hope was lost — until I beheld the awesome power of the internets, and found myself learning about square foot gardening and other raised-bed, intensive techniques.

So I built a box about 5 feet long and 20 inches wide out of some salvage 2 x 10 that I found in the garage rafters, fastened the sides together with drywall screws, and covered the bottom with the remainder of the 2 x 10s, leaving about 1/4 inch between each board for drainage.  I also drilled some 3/4 inch holes at interval across the bottom.  The box rests on 2 x 4 legs. 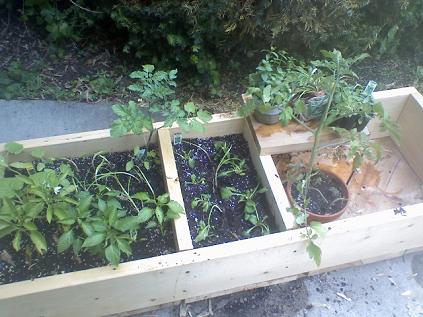 Now, the “square foot” approach seems like more effort than I’m prepared to undertake, at least this year. Instead, I just threw a bunch of soil, some peat moss that some friends left behind when they moved, some good mulch, and mixed it up.  Then I proceeded to just cram it full of naturey-goodness, paying no particular attention to spacing or whatever.  I’m sure I could get a better yield if I tried harder, but like I said, this first time is more of a lark than anything.  Next year I plan to take it a bit more seriously.

In the top left, hidden behind the bell peppers in the bottom left, are two cucumber plants already sprouting whatever it is that yields num num later in the year.  The bell peppers have begun to flower nicely, and the hot peppers planted adjacent are also doing nicely.  Above the hot peppers is a cherry tomato plant on which I noticed the first flowers earlier this week.  I threw some onions in the mix, too.

The second bin contains spinach.  From the little that I read, spinach sucks all nutrients out of the soil so it is best to keep separate from most other vegetables.  So I did that.

The third bin (which may be subdivided later) has not been planted yet, but I’ve got a large tomato plant with flowers, and I’m looking to pick up another one at the market tomorrow perhaps.  I have about 40 more onions that need planting soon, and I’m also considering carrots or potatoes or some other root vegetable.  There is also a peat-pot with Mint growing, which might be transplanted to clay and left to grow inside the kitchen window, in order to satisfy my summer love for Mojitos.

My recipe calls for raw sugar instead of the white powdered sugar or white crystal sugar, the juice of one lime (give or take) and I use a generous amount of mint leaves, maybe 5 or 6.  Muddle the sugar, lime juice, and mint leaves first, then add ice, then rum, then soda, then stir.

I’m looking forward to learning something from this, and also hoping to get some good eats, too.

A few weeks back, the Washington Post had an article about what drinks you should enjoy in the winter months, or rather, how to stock a bar so as to not embarrass yourself in front of seasonal guests.

The writer recommends Maker’s Mark bourbon, and although enjoyable, I’d prefer the (slightly) more expensive Knob Creek. Of course, I’m no expert on these things — but the experts will always tell you to go with what works for you. It’s always a good idea to stock a few bottles of wine, perhaps some Cabernets which go well by the fireside. A few sparkling wines or champagnes for aperitifs or dessert wines are nice to have, too. In the after-dinner drink category, Port wines and Scotch (I’m partial to Laphroaig) should always be included.

The diversity of tastes and preferences among beer lovers knows no rival, so despite our beer-snobbery, keep a few Bud Lights on hand for the less adventurous. Rogue Ales makes a robust Christmas ale which reminds me of something else I’ve had before, although I can’t place my finger on it. Samuel Adams also makes a very interesting and complex Christmas seasonal, Old Fezziwig which I’d also recommend for those seeking something richer than the typical American-style light lager beers, which I try to avoid at all cost. Local to Michigan, the Third Coast Old Ale brewed by Bell’s, might be a little (or a lot) harder to find throughout the rest of the country, but if you see it on tap at your local brewpub, or in the aisle of your favorite purveyor of fine spirits, give it a try.

In related news, The Economist is reporting that Law of Unintended Consequences, Federal Farm Subsidies, and the common thread among them: Energy Independence, for your inconvenience.

The FDA has decided [stale link] that it is safe to eat cloned animals, and with all the starvation and suffering in the world today, you’d think that everyone would rejoice at this news. But everyone isn’t:
“Meat and milk from cloned animals have no benefit for consumers, and consumers don’t want them in their foods,” [Consumer Federation of America spokesperon, Carol Tucker] Foreman said

Meat and milk from naturally conceived animals has no benefit for consumers, either. Unless, you know, they eat the meat and drink the milk. As to whether consumers do or do not want cloned product in their foods: the only way we could say that with any degree of certainty is if we put those products to the market test. If consumers buy them, that is enough evidence that consumers want them. If not, Foreman’s statement is validated. But Ms. Foreman is so sure of her position that she plans on asking “food companies and supermarkets to refuse to sell food from clones.”

Now, I may or may not be comfortable eating cloned tenderloin. I’m just not sure. And you don’t have to be. What’s important is that we don’t allow the Foremans of the world to substitute their opinions for our own judgement and sensibility, just as we don’t allow the raw vegans to substitute their opinions for ours when we’re presented with a hamburger, stacked high with bacon and bleu cheese.

I don’t necessarily expect the cloneburgers (or clone-milkshakes) to be a runaway, overnight success. But I’m not trying to force anyone to adopt my tastes, and that’s the difference between libertarians, and nazis like Foreman.