They’ve always made a big deal about “count day” where I’m from. I’m sure other States do something similar. The idea is that the State uses the attendance count from this one day as the baseline count, and this attendance count is then used when the districts divvy up the State funding available for public schools.

The attendance count for the fourth Wednesday of every school year is used to determine 75% of state funding for schools statewide. It is a crucial day for cash-strapped public schools.

I always thought it was silly, but it’s especially silly now in the 21st century with digital everything. What’s the point of a single “count day”? Presumably every district — every school and every single classroom — has a “count” every day if they’re taking attendance. So using the attendance on a single day as proxy for overall participation and/or attendance in this day and age (c’mon, it’s not like someone has to manually tally all the attendance numbers) is about as retarded as a football bat. And it can easily be manipulated, something which Detroit Public Schools acknowledge through the “incentives” they put in place to get more kids to show up, skewing the numbers in their favor:

In Detroit, count day has become a festive affair in many schools. This year, it will include prizes, giveaways, face-painting, open houses and health screenings to make sure kids — and thereby state funds — show up to school. Parents who send their students for a full day will get a chance to win a Target gift card.

There is no reason to believe that a sample size of one is representative of an entire district’s daily enrollment/attendance. They should use a mean attendance; the average number of students attending school on a daily basis over the course of the year.

I suppose it was only a matter of time, given that this sort of thing has happened everywhere pot has been legalized for medicinal purposes…

On Wednesday night, two medical marijuana dispensary in Ferndale and Waterford, Michigan, were raided. Interestingly enough, Ferndales mayor was surprised by the raid, citing the fact that Clinical Relief (the city’s only licensed dispensary) was in “full compliance” and that there had been no complaints, “zero problems” with the clinic.

One man who called a local talk-radio show this morning witnessed the raid on his drive home from work. He said he thought it was a hostage situation or something, and didn’t learn the truth until he read about it in the paper yesterday. According to his account, law enforcement was in full commando attire with ski masks and automatic weapons.

Allegedly this raid had to happen because the dispensary may have been distributing reefer to people without the proper paperwork (a claim that the owners deny). So, this is essentially a licensing issue — and it’s now OK I guess to send SWAT teams for that. There is no indication in any of the sources I’ve read to suggest that they were backed by a violent gang of uzi-wielding rastafarians, or anything else that would warrant assault weapons and commando attire.

…I heard them say they want a test case. That’s what a detective said at the store.

A “test case”. That makes sense in light of Oakland County Sheriff Mike Bouchard’s vendetta against the demon weed. As I’ve noted previously (see here) Bouchard is not at all interested in the will of the people when his own personal agenda is at stake, and he has said as much. In a better world it would be grounds for popular revolt, but at the very least should be grounds for immediate dismissal. But I digress.

Citing an (admittedly) unscientific poll when this was still a ballot issue, I said at the time that Bouchard’s outpsoken disregard for the will of the people is evidence that he has somehow managed to lodge his head inside his anus. Then, in November 2008 when the ballot initiative legalizing pot passed by an overwhelming margin, the people spoke with what little voice the system allows them.

It’s not about what the people want. It’s not about the public welfare. It’s not really about addiction, dependency, or gangs, or any other side-effect of the war on drugs. It’s about power. And Bouchard, like other petty tyrants, doesn’t want to cede an inch.

I wouldn’t doubt for a second that Bouchard staged a raid like this, for the purpose of obtaining a “test case”, either to directly challenge the law, or more likely as a show of force and exercise of dominance, a masturbatory display of power-tripping ego.

Thomas Smith suffers chronic pain from two deteriorated discs in his spine, he says marijuana helped him end an addiction to prescription painkillers. “Those drugs kill people.  It’s the drug companies who are the drug dealers,” he said, lamenting the fact that law enforcement treats people like him as criminals.

The real criminals are all around, Thomas.  They just happen to be wearing the deupty’s brown uniforms and driving squad cars.

Editor’s note: Several people have pointed out that the article linked to (below) is from 2007; an important point which I somehow overlooked when drafting this post. I understand that public backlash at the time ultimately may have quashed this exemption. With either of these relevant facts in mind, some of the conclusions drawn below (particularly those related to the timeliness of this “exemption” [which I mistakenly thought to be far more current] and the recent Deepwater Horizon disaster) are no longer appropriate. I believe the core argument remains essentially unsullied by this unfortunate oversight and for this reason, I have left the body of this post unaltered from its original published form.

Yesterday I read that Indiana has granted BP an exemption to anti-pollution laws, which will allow them to dump significantly more pollutants in to Lake Michigan.

Already one of the largest polluters along the Great Lakes, [BP] can release 54 percent more ammonia and 35 percent more sludge into Lake Michigan each day. Ammonia promotes algae blooms that can kill fish, while sludge is full of concentrated heavy metals.

The EPA and other federal officials, whose are ostensibly responsible for “protecting” the environment, have not objected, despite the fact that regulators admit that they are “unsure about the ecological effects of the relatively new refining process BP plans to use.” Note that “heavy metals” is sanitized language for refining byproducts, known poisons like lead and vanadium, and ammonia is known to cause problems in water ecosystems.

My brother chimed in on FB yesterday, “Nothing like not knowing what you’re doing, but pushing ahead anyway.” Indeed. Not knowing what you’re doing is akin to not know what are the risks and probability of failure, and potential consequences. Which is another way of saying: things could turn out to be way worse than anyone perceives, because nobody knows what the true risk is. Does the Deepwater Horizon ring a bell? 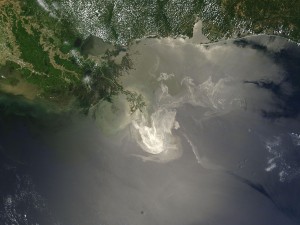 The gulf oil spill as viewed from space via NASA

On that note, new reports indicate that Deepwater Horizon has been spewing far more than the government and BP were previously willing to admit, although I find it extremely hard to believe that they didn’t know the approximate spillage. After all, the State is Big Business, and Big Business is the State. Neither party is looking out for you or yours.

The oil spill off the Gulf of Mexico is even worse than previously thought, with twice as much oil spewing into the ocean than earlier estimations suggested … Most experts believe there is more oil gushing into the sea in an hour than officials originally said was spilling in an entire day … The new figures mean Deepwater Horizon is producing an Exxon Valdez-size spill every five to 13 days. — BP Oil Spill Estimates Double (The Guardian, UK)

This is outrageous to begin with, but even moreso in light of the Deepwater Horizon shenanigans. Then again, it’s par for the course: this is your government, selling you out to the highest bidder. Again.

Tangentially, it was an environmental activist with an armful of pamphlets and a petition about pollution in the Great Lakes which prompted me over two years ago to declare that governments are the greatest threat to the environment, they actively subvert grassroots movements that would preserve ecosystems and actively subsidize, tolerate, or permit evil corporations like British Petroleum to destroy the environment.