Obama came to Detroit, pledging support for the Auto industry. This is of interest, because he’s not exactly been friendly to the auto industry in the past, which just goes to show that politicians will promise anything in the name of power.

And people just eat it up, because they’re idiots, and as such they are inclined to believe the lies, in proportion to how badly they want those lies to be true. Such is politics. I wonder what it feels like, to be able to pledge Peter’s money to Paul, with no consequences or accountability. Just wondering.

Now for the cheap shots: The first picture, where Obama has donned the Rec-Specs, he looks like a very young Kareem Abdul-Jabaar. On the right, I couldn’t help but notice his vaguely Che-rific t-shirts. 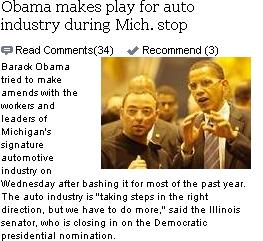 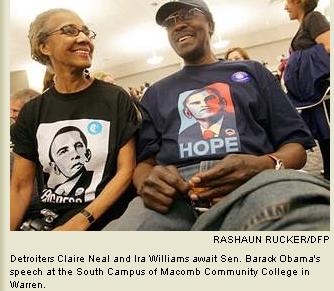 no third solution » Blog Archive » Get Disappointed by Obama