I was looking for a YouTube video of Anti-flag’s “Stars and Stripes” in celebration of July 4. Despite Anti-flag’s sometimes overzealous idolization of “democracy”, the band is pretty consistently and vehemently anti-nationalist, bringing us such songs as “No Borders, No Nations” and “Die For Your Government”. They’re anti-nationalist, anti-propagandist, anti-plutocratic left-anarchists. My query didn’t return anything other than some kid’s clip-art slideshow.

Anyhow, on one of these videos, I saw in the comments:

anti-flag loves the USA they just disagree with the bush administration and its policies, and also with previous evils committed in the name of america, however they are all for the freedoms and rights which america was founded on, dont place your hatred on the usa as a whole but rather on the hi-jackers who are trying to turn this country into a police state 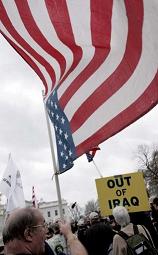 They’re all hijackers. Let me rephrase that: Every government ever known in the annals of human history has been a hijacker of man’s individual freedom. Every government, by definition, is a police state to one degree or another.

These comments (e.g., Anti-flag loves the USA) are indicative of a complete lack of independent thinking. People are confusing the so-called American ideal, with the band’s messages of liberation and freedom. If these ideals resonate with you, it’s a mistake to identify them with any particular brand of nationalism or patriotism.

Anti-flag doesn’t love the institution of “America”, but one can identify many of their messages with some forms of the so-called American ideals of life, liberty and equality.

If you are going to fly a flag today, and you acknowledge these ideals, of freedom and prosperity and liberty and equality (setting aside that whole “slavery” thing) you might consider making the statement by flying it with the union down#.

This is a sign of distress, flown for anyone who will listen.  The people who don’t throw bricks through your window will probably be inexplicably angry with you. Ask them why they’re mad, that is, if a police officer doesn’t break in to your house, choke you, and then arrest you for assault and “desecrating” the flag. They’ll say something like, “You hate America” and they’ll conclude that you must also hate all the things which they associate with America.

But “America” is a conceptual package deal.

this country named “america”, is built on graves
of the natives who lived here before, genocide took place
the word “america” means “freedom” – as in, “free to kill the free…”

don’t fly those stripes, those stars-and-stripes for me

You can’t just sit there and look lovingly at a 232-year old parchment that declares freedom, and ignore the rest of the historical record. It’s possible to love and practice the ideals of equality and freedom, while hating the government to which most people mistakenly attribute these notions.

I love my freedom, but that doesn’t mean I don’t want more of it.

#US Code Title 4 Section 8 Paragraph (a) The flag should never be displayed with the union down, except as a signal of dire distress in instances of extreme danger to life or property.