Note: This is a slightly updated post which originally appeared on the anniversary of the completion of the Berlin Wall. In memory of the first refugee slain attempting to cross over it, one 18-year old German laborer named Peter Fechter. Mr. Fechter would be 64 if he hadn’t been gunned down 45 years ago, Sunday.

Remember that every wall capable of keeping your enemies out, is just as capable of imprisoning you.

I came across this in yesterday’s NYT which requires a pesky, yet free “registration.” A similar story appears in The Independent:

East German rulers always insisted the use of firearms at the border was a “last resort”. The document [recently discovered by German archivists] proves otherwise. 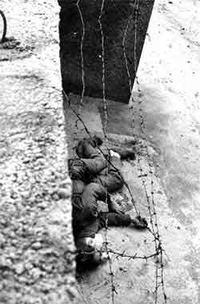 Setting aside pedantic inquiries such as, for what exactly, are these tactics a “last resort?” this revelation should come as no surprise. Surprising, perhaps, that someone found the order, but did you – even for a moment – doubt that such an order existed? If you’re not allowed to leave, it’s not a society, it’s a gulag. Government is not voluntary and compassionate, it’s a death march.

Governments are always conceived in violence, after which they create undeniable slavery on an epic scale. National Socialism, indeed any brand of Statism requires the use of these tactics to one extent or another.  Lethal force is simply the “last resort” used against anyone who wants to leave. Modern empires don’t need concrete barriers and gun turrets to keep us imprisoned, they can make us tax slaves, resistance to which (as per usual) leads ultimately to death.

Even when the gun is out in the open, for all to see – even when we see the slaughter of innocents – someone in an official-looking uniform tells us, straight-faced, that there is in fact no gun and that we don’t need to be afraid of getting shot.

The gun that’s “protecting” you, is always, first and foremost, pointed at you.

no third solution » No Justice for Marcia Powell