Driving through Detroit, past burnt-down buildings, crumbling concrete and peeling paint, testaments to decades of neglect and decay at nearly every intersection, one might be surprised to learn that much of its 138 square miles was once farmland. 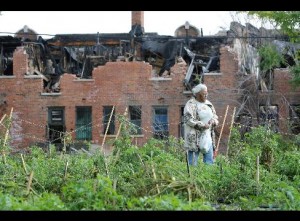 Yes, the city that put the world on wheels was once, like many others, dotted with family farms. If you were to visit the Wayne County Register of Deeds, and look through the old plat maps, and the subdivision descriptions, the microfilm images of a surveyor’s drawings from a century ago evidence farms of all sizes, from ribbons to quarter sections. To this day, many of the city’s streets still bear the names of the families who once owned farms on these locations: Brush, Beaubien, Campau, Cass, Meldrum, Riopelle… But instead of farms, or even tenements, tens of thousands of abandoned or otherwise vacant homes, lots, commercial, and industrial properties dot the landscape of Detroit.

At what point does this pattern of failure become evidence of neglect or, more importantly, of abandonment? And what should be done about it?

Could it be farmland again, one day?

The Bloomberg article where I found the image above suggests that “mini-farms are a stopgap measure at best,” noting that one Real Estate Broker “wouldn’t put [his] money in Detroit.” I wouldn’t put my money there, either. But there are thousands of people who are already stuck in Detroit. They don’t have any money at all, and they don’t have anywhere to go. How can they make the most of their situation?

Some people think that the city can be brought back to life through urban farming, a grass-roots sort of movement taking roots across the country, is usually small- or micro-scale farming operations, where individuals (or groups of friends/activists acting in concert) till vacant lots in inner cities, either for produce or for aesthetics.

I think the urban farming movement is a ripe opportunity (ok, no more horticultural puns!) for people to become involved in their communities, however I think the approach is fundamentally flawed: working with the cities that have neglected to be good stewards sends the wrong message. This “compromise” rewards the city’s prior failures. The biggest impediment to urban farming of course, is the City, which sat idly by as land fell into disrepair, neglect, disuse, etc.

The City and its bureaucracies are the last people anyone should have to ask for permission to do anything. Instead, urban farmers should be saying “screw you, City!” and should contest the City’s claim to “ownership,” asserting the principles of abandonment and homesteading, at every possible opportunity.  Although these claims would likely be challenged in court, the City should not contest these adverse possessions. Since, as evidenced by the aforementioned “decades of neglect”, the City has no real interest in seeing urban farms (or anything, for that matter!) thrive, it could simply offer these lots to residents on a “homesteading” basis: “If you maintain it, improve it, live on it, etc., it’s yours; free and clear.”

That last condition is crucial, because it practically guarantees that someone will make use of the land. Artificially high barriers to entry preclude most but the most politically well-connected from putting vacant city lands to any viable use. The city clings to properties that are worth less and less each year (indeed some of these parcels probably have a negative value), hoping that someday they can leverage these properties, but in the meantime forcing the burdens of their ineptitude to be borne exclusively by those unfortunate enough to still live within the city limits.

One local businessman wants to make supersized Urban Farms, which, while a hell of a grand idea, is mere economic rent-seeking, and deserves all the scorn worthy of such tactics. Essentially, he wants a bunch of handouts in the form of free or greatly discounted property, in order to profit from a large Factory Farm (or Farms).

John Hantz of Detroit tells the Detroit Free Press for a Thursday story that his plans for Hantz Farms call for converting hundreds or even thousands of vacant parcels in the city for agricultural use.

The Free Press noted that,

Land assemblage remains a key question. Hantz owns several parcels in the city, but the vast majority of the acreage he needs for his project is still either owned by private parties or is tax-foreclosed land owned by the city, county and state.

Hantz envisions the city, county and state donating the land to his project or selling it at a nominal cost. The payback would come in increased tax revenues once the farm is up and running.

Detroit hasn’t done a god damned thing in three or four decades, deserving of even one thin dime. If the City gives or “sells” parcels to Hantz, it’s only because he promised to pay the city (taxes) a tribute she did nothing to deserve. So many years of neglect, of documented corruption and abject failure should nullify whatever claim to these properties that the city ever had (legitimate, or nay) in the first place. Because the City abandoned these properties, abandoned its constituents, the City should be the very last organization which has any say, any power whatsoever about what becomes of these places.

The city only wants to keep its power, keep or increase its tax base, etc. To promote the development of urban farms (or anything, really), it merely had to allow them.  So, if anyone deserves to pick Hantz’s pocket, it’s the disenfranchised masses who still call Detroit “home.” Why should they, having weathered decades of neglect be pushed aside and cast off, in favor of someone looking to make a quick buck?

As Absentee Landlord writ large, the City still “owns” these parcels in the legal sense, and accordingly, exercises a great deal of control over what would-be improvers might otherwise do, although n most important regards, the city has already effectively abandoned these parcels. Understandably, unable to raise enough taxes to pay for the demolition of these nuisances, (why should those few remaining in the city provide, through taxes, a subsidy to those who might be willing to relocate there?) they crumble further.  Some of these lots have been vacant for decades. It’s funny, but in a very short amount of time, really, near-vacant lots bearing the footprints, or charred skeletons of once majestic victorian houses, have been reclaimed by the elements. Nature will do what she does, if left alone. (There are several fascinating photo-essays at DetroitBlog, here and here.)

I suggest a radical experiment: try something new for a change. For once, let the solution to “government failure” be anything but “more government.”  Let anyone have these lots who wants to improve them for personal use: housing, farming, business, etc. Let them attempt to succeed where generations of government have failed, allow them to provide for their own, and most of all, keep the City’s leperous hands far away from their pursuits of happiness.

The City of Detroit did far more than sit idly by. Decades ago it implemented ordinances that prevented any home from being sold without being inspected and approved by the City.

…To think that the City should be in any way compensated for these abandoned properties is atrocious. The City of Detroit should be paying damages to the previous owners to compensate for the loss of previous value…

I’ve not argued that the City should be compensated; quite the contrary.  The fact of the matter is that “the City of Detroit” lacks the financial wherewithal to pay even a modicum of damages to any of its many, many victims.  As a corporate/municipal legal entity, there is practically nobody who is (or could be held) personally liable for these damages.  Wholesale liquidation of the City’s holdings, and distribution to its remaining victims; well, I could certainly get behind that.

DETROIT: the awakening of an industrial city in ruins | Pensando el Territorio

Detroit: the awakening of an industrial city in ruins | Pensando el territorio