Today these are all front page news stories: Tiger Woods crashed his car, rumored to be be cheating on his wife. The daughter of a former president is engaged to be married. Black people are disproportionately impacted by the current economic depression. Dubai World is bankrupt. Obama vows to continue war in Afghanistan. Some guy shot and killed a few cops near Seattle. 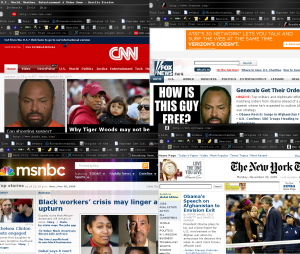 But all of the news outlets are ignoring* the story of the century.

Scientists at the University of East Anglia (UEA) have admitted throwing away much of the raw temperature data on which their predictions of global warming are based.

It means that other academics are not able to check basic calculations said to show a long-term rise in temperature over the past 150 years.

Which is enough, in itself, to cast doubt on every single conclusion drawn from these data. It means there is no way to test them. No way to validate or invalidate them. It doesn’t mean that the conclusions are wrong, it means that we have no evidence to suggest that the conclusions are right. Coupled with the thousands of leaked e-mail correspondences released last week, I think there’s a good case to be made that the researchers were involved in deliberate misrepresentation of their findings.

“Climategate” (did I mention I hate the use of ‘-gate’ as a suffix?) should be the story of the century. One comment at the Times explains:

this global warming email disclosure, and now the incredible loss of raw data relating to science about the alleged destruction of the earth…. should be one of the biggest stories of the last 100 years, bigger than the Pentagon Papers or Watergate or any other…because the entire world was being manipulated into action based on the premise that the world might come to an end on science that was supposed to be unimpeachable

For twenty years or more, the entire world has been duped into action based on faulty, flawed, incomplete, exaggerated or untestable “science”. Governments have enacted policies to combat the “effects” of a phenomena the existence of which has never been proven, and the validity of which has just been destroyed.

But nobody’s talking about it.  They don’t need censorship, just misdirection, distractions.

*In fairness, this story was mentioned on the Fox News homepage. But it was buried, as they say in the print industryy, well “below the fold”.