On the flight home from Utah in February, I picked up a copy of some hipster zine that some previous Southwest Airlines customer had left in the seatback in front of me. 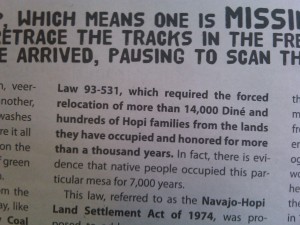 Thumbing through the pages, I read a brief article about Public Law 93-351 (you can read some history about it here), which was appalling on a number of levels.

What was once thought to be barren desert “only fit for Indians to live on” proved to be rich in oil, coal, uranium, and copper

And so the corporate interests, eager to exploit the land’s mineral rights, successfully lobbied the federal government to install puppet governments (amenable to corporate interests) among the Hopi and Dineh tribes which began selling-out to Uncle Sam about a century ago. Eventually though, that was not enough so they fabricated a dispute between the two tribes and the resultant solution was to force relocation of thousands of natives (in order that the land may be strip-mined for its valuable resources).

If you think even for one second that the U.S. government is above imperialism, that they don’t do this sort of thing and that the complaints coming from the less-developed countries against the American Empire are unfounded, hateful propaganda, I think you’re sadly mistaken.

They’re willing to do this. Right here in the good ol’ US of A.

They’re more than capable of perpetrating atrocities just like this (in reality, probably much worse than this) in resource-rich foreign countries where the brown-skinned population has no effective voice, steward or guardian, and media coverage is slim to non-existent.