It’s been a freaking month since that Deepwater Horizon rig exploded in the Gulf of Mexico, and oil is still pouring into the gulf at an alarming rate. Although BP initially claimed that 5,000 BBLs per day were flowing into the gulf, some independent scients have estimated that the true volume may be nearly twenty times that much — 95,000 BBLs per day.

According to CBS News, The “top kill” method of plugging the leak (which “involves directing heavy mud into crippled equipment on top of the well, then aiming cement at it to permanently keep down the oil”) may be implemented on Sunday, May 23, although it may take a few weeks for it to work its magic.

The procedure begins with the ‘junk shot’ that is a scientifically-designed recipe of various materials that will create a plug in the blow out preventer and choke off the flow of hydrocarbons. Heavy drilling mud is next pumped in to kill the well then followed with cement to permanently plug the well. 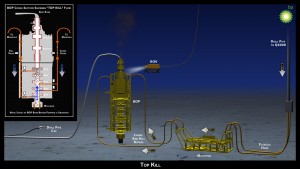 The materials used, in a ‘junk shot’ will include well-known materials such as pieces of tires, golf balls, pieces of rope, etc. Each of these has been proven to fill various sized spaces in the blowout preventer until the flow is stopped. While there is no known perfect ‘recipe’, a number of combinations of materials will be used. This procedure will be pursued until it is successful or deemed to be ineffective.

I get that this is an almost incomprehensibly enormous problem. It’s really uncharted territory, the first of its kind, and so developing and implementing a solution is going to take time, involve a great deal of uncertainty, etc. But you’ve got no business drilling oil if you don’t have a contingency plan, and a backup plan, and a backup-backup plan which can be implemented in a matter of days (not weeks), all of which have either been proven to work under same circumstances, or have been independently analyzed and demonstrated to have an extremely high probability of success.

I don’t care if it’s leaking 5,000 BBLs or 95,000 BBLs or 10 BBLs per day.  If the “top kill” method is the solution which is most likely to work, it should’ve been the very first thing they did after clearing the debris and extinguishing the flaming rig.

No. Questions. Asked. BP should simply not have an option to sit and let things play out, to take their time, to delay in order to salvage the well. If it means that BP has to junk the entire well, then that’s just too damn bad.