Several times in the last week I have seen people compare the OWS protesters (unfavorably) to the Tea Party.  The argument is something like, “How come none of the Tea Partiers ever get arrested even when a guy shows up with a rifle on the Capitol steps? Compare this to OWS where the protesters are being arrested everywhere and in large numbers!”

I don’t know how many Tea Partiers have been arrested. Maybe it is zero. So what? 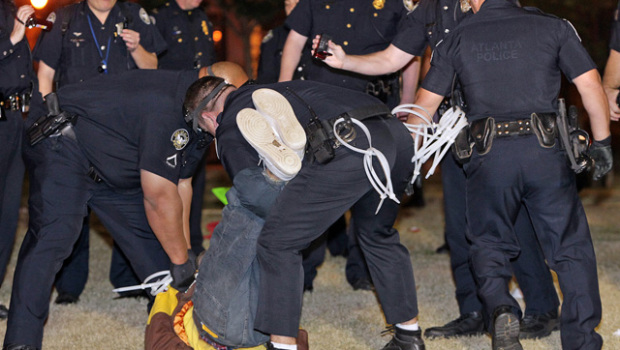 Protesters being arrested in Atlanta

It is an unsubstantiated question-begging attempt to vilify OWS:  they are criminals because they have been arrested, therefore, disassociate. Notice the blind deference to prevailing ruling class attitudes, questioning neither the legitimacy of the arrests, nor the merits of the protests (I would expect any group seeking real change to consider these factors).

I’ll leave the merits of the protests, these have been covered amply by others. As for the arrests, there are two main reasons why the State arrests people.

First and foremost, as long as OWS remains a dynamic grass-roots movement, and as long as they challenge the very legitimacy of the status quo, they remain a political threat, and so they will continue to be persecuted for trying to bring their dissenting opinions to fruition.

Additionally, OWS’s siege-like tactics present the ruling class with a more sustained problem than other political activists like the Tea Party, who’s strategy thus far has been simply to show up, complain for a few hours, and then go back home to the suburbs. The authorities can’t just wait for the protesters to go home at the end of the day because at the end of the day the protesters are not going home! Because the Tea Party is not waging a sustained protest, they don’t require the attention or scrutiny reserved for larger demonstrations like Occupy; as a result there are far fewer opportunities for the police to intervene.

Aside from the question of strategy, at the end of the day most of the Tea Partiers are still essentially pro-establishment and so they are not being arrested because they don’t matter and they don’t matter because the ruling class knows how to exploit and appease an organized political front.

On the other hand, the ruling class does not know how to handle a Hydra like the Occupy movement. If you want things to change, you’d better pray it remains that way.