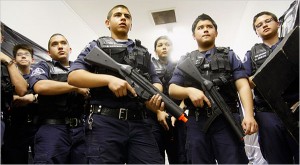 The NYT’s Jennifer Steinhauer reports on an Explorer Scout program, indoctrinating training American youths — some as young as 13 and a half — to preserve the Empire, which of course means learning how to shoot brown people from poor countries trying to make a better life for their families and learning how to destroy lives by perpetuating the war on drugs.

Explorers were instructed on how to quiet an obstreperous lookout. “Put him on his face and put a knee in his back,” a Border Patrol agent explained. “I guarantee that he’ll shut up.”

“Cathy Noriego, also 16, said she was attracted by the guns. The group uses compressed-air guns — known as airsoft guns, which fire tiny plastic pellets — in the training exercises, and sometimes they shoot real guns on a closed range. “I like shooting them,” Cathy said. “I like the sound they make. It gets me excited.””

Children, malleable minds, lured by the sound of gunfire. Hell in a motherf*cking handbag.

There’s some sick irony when teenagers with surnames like Noriego are learning how keep people, who were unfortunately born on the “wrong” side of some arbitrary and purely imaginary line, out of their country.  And I can’t help but think that many of these children wouldn’t be here today if there had been a draconian border policy a cenutry or two hence in order to preserve America’s “Manifest Destiny”.